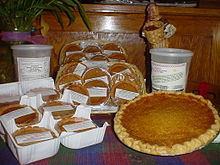 The pies originated with the Nation of Islam movement and The Most Honorable Elijah Muhammad, who encouraged their consumption instead of richer foods associated with so-called soul food. Year around MUI sells the supreme bean pies as part of our fundraising efforts.

This site uses Akismet to reduce spam. Learn how your comment data is processed.